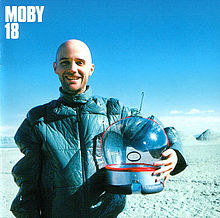 Ah Moby. Your baldness makes you who you are.

I've never been a huge fan of Moby. To me, his albums are nothing but coffee table music. The kind of music you put on when you've got some girl back to your flat that you want to romance over very large glasses of red wine in the warm autumn evenings.

Unfortunately, every music editor for television documentaries and films since 1997 has immediately turned to Moby for incidental or illustrative music. 18 is one of those albums where you spend the majority of the time listening to it half expecting to see the irritating toothy grin of "Professor" Brian Cocks [sic] loom into view and give one of his patronising monologues about why you are doing the dishes.

After you have washed Brian Cocks' blood off your hands you then start to muse about which film the song you are listening to appeared in (Extreme Ways is the end credits tune for the Bourne films). Your date looks on horrified at the bloodied corpse of Brian Cocks and listens to your pleas that it was for the best as you could never let him take the over Sky at Night since Patrick Moore's death. It was for the good of the nation. At this point she picks up her bag and leaves. The evening spoilt. Thanks to Brian Cocks. Brian Cocks and his baldy musical chum Moby. He looks at you from the album cover. Grinning that "Heh! I'm famous for playing bits of records me!" smile and you vow to track him down and do the same to him as you have done with Brian Cocks.

Then, while you clean up the bloody cadavers of Moby, Cocks, Cameron and anyone else that takes your fancy, you think "Hey! What I could do with is some nice background music. I'll put that Moby CD on..." 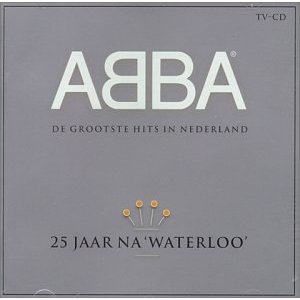 I am a firm believer that when someone breaks John Lennon's rose tinted spectacles, historians will realise that the most influential band of the past 50 years was not John, Paul, George and Ringo and was in fact Abba. No. You will fail to convince me otherwise. I won't hear it. Every record collection of people born in the 1970s should include at least one Abba single or album. Everyone knows an Abba song if not an album. Every family gathering since 1978 has had a cheezy disco with at least one Abba song or melody playing.

Hell, Bjorn and Benny have not stopped with Abba and have continued to exude their musical talent in areas you probably wouldnt believe. Their mix of cleverly crafted lyrics and joyous pop tell dark and sinister stories of unrequited love, collapsing relationships and even underage sex. There is nothing more disconcerting than watching old Aunts cheerfully caterwaul along to an Abba song, blissfully unaware what the true meaning of the lyrics are.

I can see you will need convincing.

Listen to  Take a Chance on Me and tell me that the lyrics are not those of a stalker. Dancing Queen - a story of a leering pervert. Gimme! Gimme! Gimme! - the wanton desires of a nymphomaniac. Chiquitita - the story of someone taking advantage of someone in dire romantic straits. The Name of the Game - about prostitution.  Knowing Me, Knowing You - the story of a failed marriage and the fallout of a truly disastrous argument, the consequences of which are self uncertainty and depression further supported by Winner Takes it All which is clearly the vitriolic outburst of the spurned spouse. It's weird watching people dance, stomp away and sway joyfully at songs with such deep and dark meanings. It's kind of like watching your gran sing along to Radiohead's Paranoid Android. Wrong on so many levels.

25 Jaar Na Waterloo (aka 25 Years Since Waterloo) is a compilation album from the Netherlands. I don't need to tell you what it sounds like as unless you've been living in a soundproof booth for the past 40 years you will know Abba. It's a good mix of Abba favourites, maybe not for all the family, but certainly for those that like them.

Incidentally, you might be wondering where Album 10 is....well as it is one of Zoe's favourite albums I have to wait to listen to it. So because of that, you will have to wait too.
Collapse