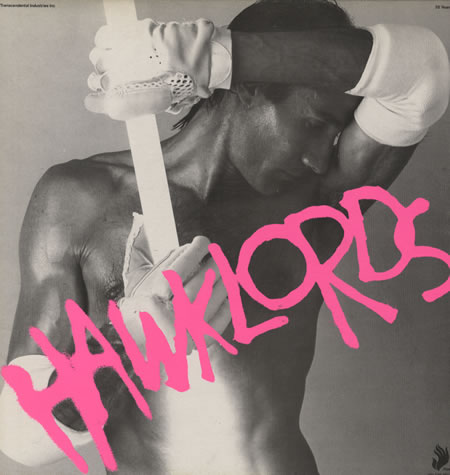 Hawklords are the little known reformation subband of the widely known Hawkwind.

You might know Hawkwind from such mind altering albums as Quark Strangeness and Charm or Pxr5 or the single Silver Machine or perhaps you know Hawkwind as that prog-band with the tits(Hawkwind employed a topless dancer for live concerts who would just squirm and gyrate, topless, to their sets) or the band that Lemmy used to play for before Motorhead. Of course, you might not know Hawkwind at all.

Hawkwind are true prog. Concept albums abound, frequently changing line ups and weird lyrics that morph into socio-political Sci-Fi motivated anthems such as Highrise. For the album 25 Years On, the lineup consists of Hawkwind stalwarts Bob Calvert, Dave Bork and Simon King (no not that Simon King, the other one) with a couple of lesser known musicians. If you are familiar with Hawkwind you will detect the immitable Hawkwind sound permeating throughout the set. In fact that is basically what it is. A Hawkwind  album performed by three regulars and a couple of session musicians.

Songs of note from the album include Psi Power and Flying Doctor. Both testaments to Calvert and Brock's lyrical genius.