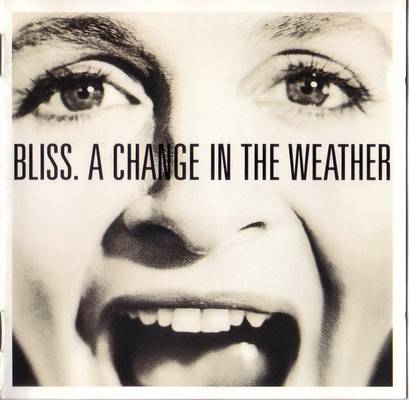 A Change in the Weather – Bliss

25 hours of listening in 96 days of 24 hour listening remaining.

I went to see Chris Isaak with Laura Beachball in 1991 and the band that was supporting was called Bliss. At first they were booed but the audience warmed to them rapidly. I did likewise.

The following day I ran into town and bought the album from HMV in that future proof format - Cassette Tape.

Of course they never made it big and as the CD vanished off the shelves forever, the tape became one of my valued possessions. That's not to say I never listened to it. I did. I listened to it many times over the following years until my cassette player was packed away never to return. Before packing away the player, I connected the bugger up to my PC and copied the precious audio from the cassette tape.

A few months later, I got a new car. With an in car Cassette player. "I know" I thought, "I'll listen to some of my old cassettes".  Then....driving down the M1 imagine my horror when Rachel Morrison starts sounding like she's having a stroke. Imagine my horror growing as tape starts spewing out of the aperture.