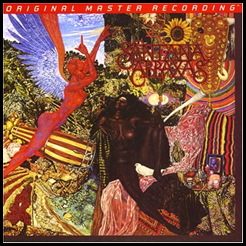 Sometimes I wonder if anyone is still actually reading these entries as I persevere to listen to my album collection in alphabetical order. But do you know? Part of me like to think that long forgotten LJ flisters might still be reading or random people might be coming across these posts many years into the future on Wordpress. I also like to think that this is kind of a historical record and in a far off distant future scores of academics and philosophers are debating not only what I meant by vampiresses with comedy inflatable breasts but also why did I have such a massive cock collection of music and were people actually interested in this and if so why?

Anyway, as I plunge on through the “A”s missing out only a couple of two track EPs as they don’t really count as full albums (If you’re really interested they are “Abandoner” by some bloke out of Porcupine Tree and “Absence and Plenum” by Lux Interna who none of you will have heard of anyway. I was also wearing my khaki short sleeved shirt and there are 7 cards in the card holder on the mantelpiece) we arrive at an unusual choice.

I’d never heard of Santana until they appeared on a soundtrack for a film I liked. So as I liked one of their tracks I did my usual thing of downloading their entire back catalogue. Yes. It was getting a bit silly doing that. Anyway, Abraxas contains Black Magic Woman and Oye Como Va  which always makes me feel like I should be in some seedy Spanish restaurant in the 1980s. Surrounded by bullet ridden corpses having just survived a Spanish Mafia attack by hiding behind the fake plastic plant in the corner.