Most of the week has been about

[New Job]
New job is ok. Pretty much this week I have been watching people work in between ignoring the clock. Clocks are evil. If you see one at work it can spoil your day. When you don't know what time it is, the day seems to go quicker.  People seem nice too. Seems like most of the people there have been there some time, which is refreshing as in my previous few jobs the longest most people had been there was 3 years.

[Council]
Council meetings can be fun but they can be dull. I believe that if you live in a community and you're unhappy with any aspect of your communal environment you should join your local council. If you don't, someone else with a different opinion to yours might make the decision that makes irrepairable changes to your environment.

Truth is though, the majority of the work is just careful money management. Recently a street lamp fell off its mount in the village. It's going to cost to get a replacement and the budget for the year has already been set. Still instead of a street light we will have a nice clean bench and some well trimmed grass verges.


Finally, today Zoe and I went to the cinema.

[Cinemas]
Cinemas have changed so much in the time I've been on the planet. When I was a kid there were loads of cinemas in Liverpool. Then came the multiplexes. Shiney new megaplexes of cinematic entertainment. Like the cinema equivalent of supermarkets, the smaller independents could not compete with the megacinemas. Small smelly independents closed as punters prefered the cleaner shiney well furnished modern multiplexes.

Then, once the competition had gone the multiplexes in turn became tatty smelly places. The prices rose. The quality of film suffered and slowly multiplexes also started to close.

While sat waiting for the film to begin in our little cinema I mused on the changes.

1. The cost - In 1992 I used to pay £3 to see the latest blockbuster at my local cinema. I had £2 left for either a pint in the White Horse on my way home or some popcorn. I sometimes even pushed the boat out and took a £10 note with me so I could have a vat of coke with my popcorn and some cigarettes.

It's not as if the cinema even has to pay a projectionist these days. Most cinemas are automated now and the job of ensuring the reel is changed or the carbon rods are burning is no longer required. The cinema staff all seem miserable and there is still a smell of dead tramps and stale sleeping bags in most cinemas these days.

2. Allocated seating - I don't like allocated seating. I want to sit where I want. Besides, usually when I go to the cinema the film I'm seeing is either at the end of its run or one that most people don't want to see because it doesn't have anyone they know in (or subtitles). So usually the cinema is empty. I'm also keen to go out of peak time. I cant stand sharing cinemas with too many people. Rustling bags, chatting, using their phones, farting or kicking the back of your chair.

I also like to sit with my legs out in the aisle. I like to wriggle in my chair. I like to be close to the screen but equidistant from the speakers because my eyesight and hearing are not as good as they were when I was younger.

Cineworld seem to think that allocated seating is important. Even in quiet theatres. So when Zoe and I sat in our seats I was pleased that the usher didn't check if I was sat in Zoe's seat or Zoe was sat in my seat. It must be something to do with the dosage of halucinogenic drugs they administer during the film. I can see no other reason for allocated seating.

3. Food - Food in cinemas has always been expensive. Why? It is a mystery. However I approve of the arrival of hotdogs in some cinemas. I also approve of the non-frisking of punters so they can get cheaper food into the theater. Like a 99p bar of peanut biscuit crunch.


Finally in food news, on a Saturday I had a sundae. Last Sunday I took Zoe for a sundae. Next week we are planning to push the boat out and have our sundae on a Monday. 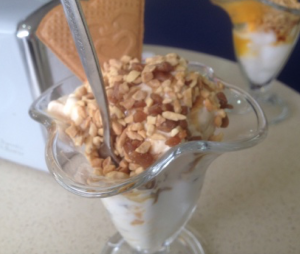