Tenby could be mistaken for any Cornish seaside town. It’s just how seaside towns should still be in the UK. The hotels are still grand, the shops still sell stuff rather than Kiss Me Quick hats and rock willies, and the beaches are still clean and popular. Compared to the likes of Skegness, Scarborough, Margate and even Barmouth, Tenby is leagues away and still comes across as a popular happy seaside town and any rundown areas seem well concealed. 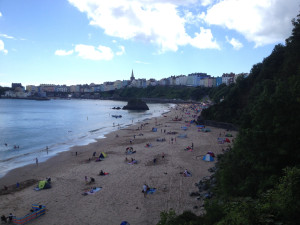 We nipped over to Caldey Island to see the monks. Of course the monks are in isolation so we didn’t see any, but it is clear that island monastic life is quite lucrative judging by the £12 ferry crossing, the overpriced food and how busy the expensive gift shop was.

Resembling Port Merion and the Prisoner set, Caldey is like a different world. Home to a holy order of Cistercian monks, they make their own perfume and offer spiritual retreats on the island while they lock themselves away in solitude and contemplation (read, play Xbox and smoke fags all day). Sounds ideal, if it wasn’t for the praying and the abstinence, but I guess you’d get over that bit after a while. 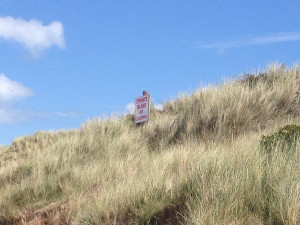 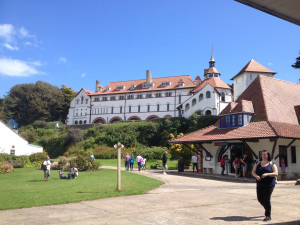 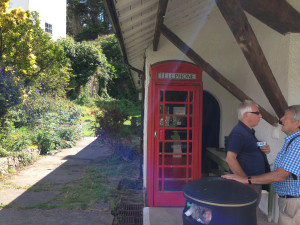 As already described, dinner was had in Plantagenet on the main land following which we headed inland to meet up with former LJ stalwart

stephmog, her daughter (all grown up now) and some swans.

The last day of a holiday is often one where you pine for a bit longer, but to be honest, by this time I was fed up with driving and, if you’re sitting down, Wales and couldn’t wait to get home.

Trying to be the smarty pants I intended to nip up the A40 and join onto the M50 rather than face Cardiff again. Instead I subconsciously took a wrong turn and ended up going into Hay-on-Wye, capital of second hand books.

Hay also seems to be on the decline. Bookshops giving way to second hand tat and fleamarketry akin to Quiggins in Liverpool. I love these places but, probably on account of the location, the shops in Hay seemed overly expensive. However, I was delighted to see in one of the shops there shelves full of more science fiction books to rival my eldest brother’s miniscule sci-fi book collection. Moreover, I’d hazard at there being more books there than in the Sydney Jones special Sci-fi collection at Liverpool University.

So what did I get from my holiday?

I've realised that I've had enough of Wales for now. I love wales, especially North Wales. If you offered me the keys to a cottage to live there I’d be off there before you could tell me the conditions of the deal. But like eating chocolate cake every day, you get fed up with something after a while. These feelings aren’t helped by the proliferation of “frightful” families, the modernisation of seaside traditions and how recent summers in Britain have been a bit shit. I suppose living in a holiday-cottage like house in Northamptonshire doesn’t help either, nor do recent once-in-a-lifetime holidays to the Caribbean and Hawaii.

I guess I get the feeling that I want to go elsewhere on holiday in future. Zoe and I talked about doing an A-Z of City break holidays but struggled to find anywhere beginning with X that isn’t China or Mexico. Even then, the prospect of City breaks in places like Fleet, Dundee and Gravesend fail to inspire. Casting our nets overseas adds more money to the overall cost with it being more expensive to get out of the UK than it is to get into the UK.

I also realised that my previous job of driving round the country visiting apprentices has killed my love of driving. Even today sitting still for long periods of time becomes so arduous I want to stand up to relax. To me, driving means competing with dickheads in BMWs and people who have cars bigger than they can handle. Audi and Merc drivers are not much better having witnessed a few nearly kill themselves overtaking on double white lines recently. Even my drive to work in the morning is depressing.

My next holiday should be one where little happens. There should be mojitos, icecream, wifi and sun. Ideally there would be no or failing that very well behaved children. “Entertainment” should be kept to a minimum and waiters should be summoned by a flag or an iPad app or something to bring me what I desire food-wise by the poolside. To get there it should be no more than a 4 hour flight unless sleeping tablets are provided and crucially it should be one that I can afford. Sadly, most places seem to be “family” orientated or full of pensioners and Sods Law being the rule, I’ll probably end up in Wales again next year too.