Ok, so I didn’t run away to Cromer.

I thought about the practicality of getting there and, let’s face it, Kings Lynn is a nightmare to get around. So that made me reconsider my destination of choice. Indeed, if the destination needs to change, so do the activities there. After all, there is only one Mary Jane’s and that’s in Cromer.

So let me consider Skegness as a destination. Plenty of Eastern Europeans in that part of Lincolnshire and I’ve been told that I’m of Eastern European stature. Probably because of the way I stand, don’t say much and shave only occasionally. Therefore, I’d probably fit in well.

I wouldn’t be able to fly there. No airport local to Skeggy except maybe Doncaster and you might as well walk if you go to Skeggy via Donny. A choice would exist between a 3 hour 125 mile drive, a 5 hour train and bus journey (costing untold wealth), an 11 hour cycle or a 38 hour walk. I think driving would win again. 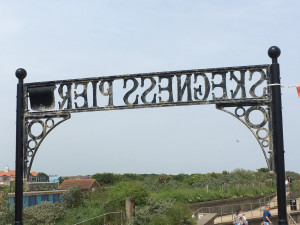 Once there, where to eat? The first time I went to Skeggy was with Mrs Gnomepants v1.0 and we had fish and chips in the Clocktower fish and chip restaurant which Tripadvisor says is shit. The next time I went was with Mrs Gnomepants v2.0 and we sat and ate near the prom which was ok, but outside and, as everyone knows, Lincolnshire is practically Svalbard so who wants to sit outside?

The little places down towards the prom are overpriced tourist traps and I’m not aware of any other places in Skeggy that serve quality sit down fish and chips with bread rolls and pots of tea. I’m sure there are some there though. Fish and chips at the seaside are like dog shit and fag butts on a council estate. Expected by decree.

One thing Skeggy does have is plenty of arcades. Especially at the pier. Most of the facilities on the pier at Skeggy are at the head end rather than the sea end. The amusement arcade there has that smell of unwashed people and a faint whiff of burnt fat from the café there. It’s not very pleasant. In or out of season. Still, it’s enjoyable if you’ve got a few bobs worth of copper coins to throw away.

Then there are the gardens. Sad remnants of a once proud age. Pretty much like all of Skeggy really, once you get beyond the tired seaside amusements and tattooed Tommys. Last time I was in the gardens at Skeggy, I seem to remember there was some event on where children were there in their droves. Mrs Gnomepants v2.0 and I attempted a bit of Geocaching but it was too busy to actually do anything without drawing attention to ourselves. There is also the miniature village. Expensive to enter and walk around, nothing much to see and, on exit, the feeling of satisfaction that you’re actually helping to maintain a quaint little amusement from a bygone age that probably won't be around much longer.

Unfortunately, if you’re looking for quiet sedate genteel seaside with piers, straw hats, ice cream and jolly old people, then you’re in the wrong place, however, if you’re looking for somewhere to walk your bulbously bald headed tattooed Sun reading beer swilling UKIP voter, then Skeggy is your place to be. If you’ve never been there, imagine an East coast proto-Blackpool. If you’ve never been to Blackpool, think about turning around and getting the hell out of there. In fact, I’d probably drive the extra hour up to Cleethorpes but it's not much better there now that the fairground has closed.

I’ve only been to Cleethorpes once. All I remember is trying to find a healthy sandwich in Boots for Mrs Gnomepants v1.0. I remember feeling done to because we’d just spent the week down near Skeggy, visiting awful places like Ingoldmels, St Leonards and Mablethorpe before heading home via Cleethorpes for a bit of irony, only to find Cleethorpes was nice and tolerable. Kind of like Rhyl without the mud, decaying old people’s homes, dog shit and smell of pasties.

So where does that leave? Brighton? Too many hipsters. Worthing? Too southern. Great Yarmouth? Nothing great about it. Hunstanton? Oh my, seriously? That leaves Wales, of which Mrs Gnomepants v2.0 is mutinous, Scarborough, Whitby and Cornwall, which are too far for anyone to even consider and the Dorset coast, where I’ve not been to yet. Blackpool and the North West are grim and also too far. So at the moment, the only place that is feasible to run away to is the recesses of my mind; the halcyon British seaside nought but a hauntological fantasy.
Collapse