Firstly I had to cross the vast lake that is known as Atlantic. To do so I had to board a plane at Blackpool Airport as all the ones in Heathrow had been stolen. The lake looked very big and I saw lots of ships and men in tin baths.

There were lots of men in tin baths

The guide told me that it is a popular American pass time to row about in tin baths. We touched down in George Bush International a couple of minutes later and I was then treated to a whistle stop tour of all the major sites.

First off we drove through New York, I dont know what people mean when they say it is a big city it was fairly small. I guess most of it was on holiday, then again I suppose it might have been in for cleaning.

Hey I thought it was bigger!

I was surprised as I always thought you could see King Kong on the top. Then my guide remided me that he actually fell from the top and was carted away to make doner kebabs. I wanted to see the Statue of Liberty but that was taken down (possibly for refurbishment)

The statue of Liberty

Turning right down Wall Street we headed towards Washington D.C.. I have always wanted to see the White House as I've often wondered how it must be to live in a house like that.

Barbara invited me in for a bit of Slapntickle
So we stopped off there and had a pint. George wasnt in, unfortunately, but his wife cooked me a fantastic breakfast. Later we headed off to see that mountain with all the heads in it.

I thought this was a bit cruel as those poor people must have been in terrible pain having their heads chopped off. But never mind. We then drove south towards the Grand Canyon. 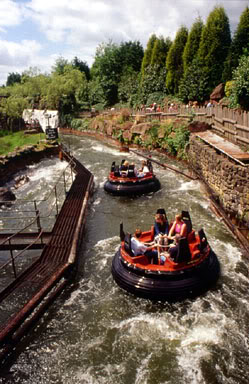 The Grand Canyon was a bit shit really

I wasnt that impressed with the Grand Canyon. Valhalla in Blackpool is much more fun and you get so much more wetter! Driving over towards the West Coast I was treated to views of the Golden Gate bridge

The Golden Gate Bridge looked a bit blue to me

I was amazed at how flat San Francisco is. I always thought it was hilly. Still as these pictures show it is quite flat.

I was also stunned by the amount of tulips there. No doubt they come in handy for those gala evenings! Alcatraz was also a bit disappointing

Anyway, speeding on we went to Hollywood.

Which I must say looks remarkably familiar, probably because of it appearing in all those movies.

Finally our tour headed back to the airport. I felt really important as we had an armed escort who helped us get to the nearest airport quite quickly. At the airport we hopped on a little plane for a whistle stop tour of Camp Delta on Cuba.

And the outdoor swimming pool

I must say that the amenities were very conducive and the inmates seemed to be having lots of fun. Though I didn't see many red coats there.

Unfortunately that is where my tour ended. I am still there. Trying to get home. Unfortunately I am being held against my will by a nice chap in army fatigues. Still the swimming pool is nice and although the camp entertainment is a bit limited to a few games of "Get that Bag on your head" and "How many rifle butts in your chest does it take you to get you to shut up" and despite no shows with Cannon & Ball or Keith Harris and Orville I'm still having fun.

Keith Harris and Orville are not there


Not to worry. They say I can go home tomorrow.
Tags: classic, tours
Subscribe