There's 16 days until my annual two week holiday begins. This year, as with other years, I am keen to go to Wales. Mrs Gnomepants is keen to spend as little as possible. I'm still going to push for Wales though, maybe with a stop off in Liverpool for a couple of nights so that we can catch up with those people we don't normally have time to meet up with.

Whilst thinking about the holiday I've realised that the next three years could see a change from the norm due to the approaching financial low spot. This may result in spending less time on holiday and going places where there is little or no cost. While camping is cheap and fun it can still be the costly side of cheap. If that makes sense. Next year every penny will count.

Anyway, while I've been musing and fantasising about going to Wales, I got thinking about the way my Dad used to take us to Porthmadog in the 70's and 80's. Instead of taking the A55 along the north coast through Conwy and then down the A470 through to Betws-y-Coed and Blaenau Ffestiniog we would scuttle down the A494 via Mold and through Denbighshire to Ruthin and Bala before gimbling down the A4212 which goes round the beautiful Llyn Celyn.

During this time my Dad drove a yellow MkI Ford Escort. It had vinyl seat coverings. Alighting from the car on a hot day would always result in cries of pain as you left the upper epidermal layer of your thighs on the black seat coverings. Regardless of this inconvenience, it seemed like we would always stop at Llyn Celyn and have our lunch while my mum told us about the village that was flooded to make the Llyn.

Lunch on such occasions nearly always consisted of cold bacon sandwiches on white bread with a thickish layer of butter or margarine. The sandwiches would be wrapped in silver or aluminium foil and they would be accompanied by a melted KitKat and a cup of warm milky coffee served from a tartan thermos flask. We would eat our lunch at the road side picnic tables and watch the rest of the holiday making public go past to their destinations. This seemed to be a traditional repast in the Gnomepants household as whenever my Auntie Joyce took us on picnics, the same fayre would be served (though more often than not accompanied by sweets and cake).

Our hearty lunch devoured, we would then continue on our route, down some twisty bendy B Road across the Snowdonian moors bypassing Blaenau and then down the A487, along the causeway (paying our 5p toll...heh) before pulling into Porthmadog itself to do the grocery shopping that would see us through the week of staying in Uncle Nat's caravan. 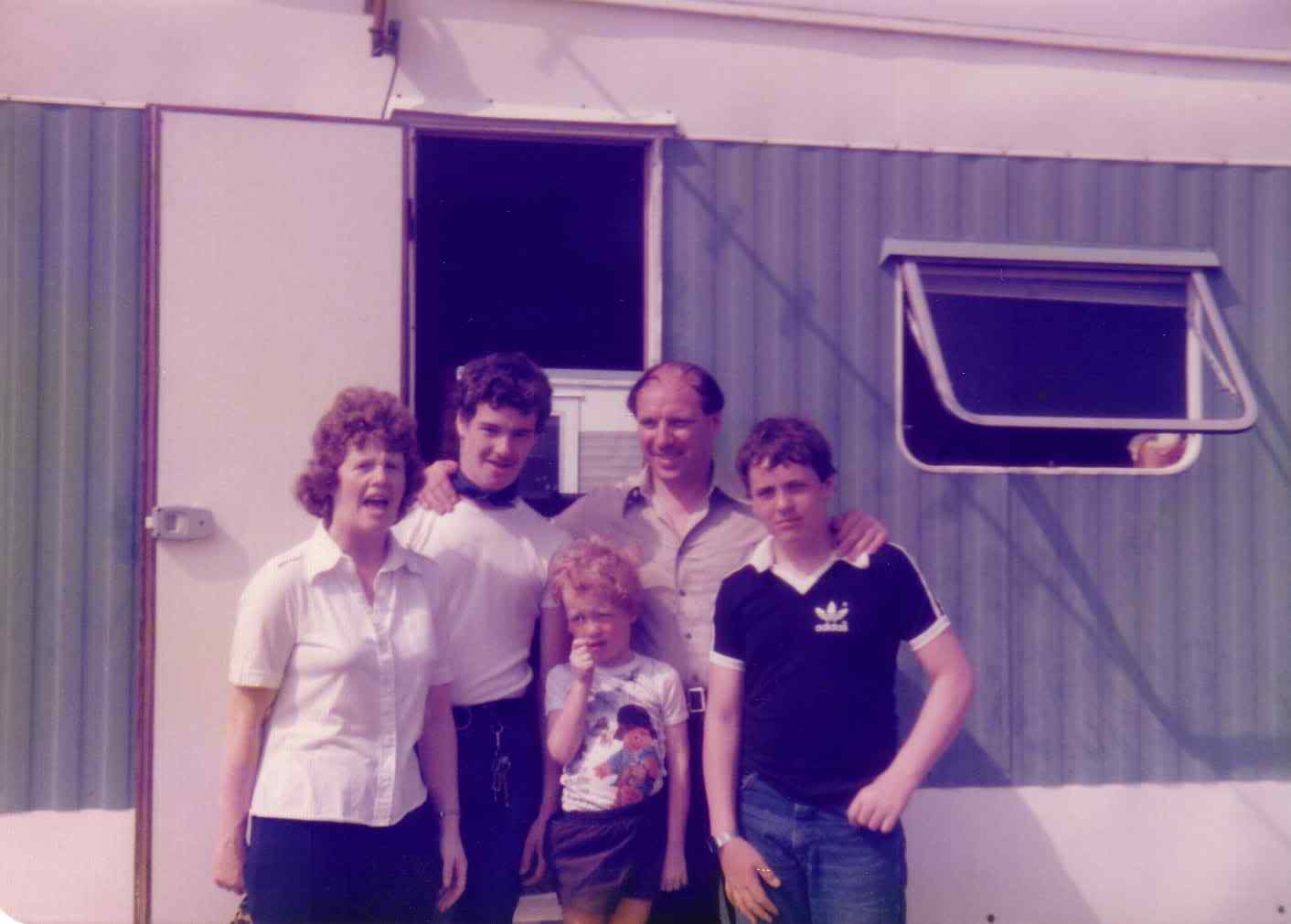 In case you don't know From Left to Right:- Me mam, our Carl (avec trainee scouser moustache), me (the little one at the front in the Paddington Bear tshirt), me dad (balding one) and our Chris (looking thin there, now he's a bit chunky).

The caravan was near the fabled Black Rock Sands in a caravan site called Greenacres. Now it has its own swimming pools, luxury static caravans, security watch towers and special 4x4 Chelsea Tractor parking facilities, Cocaine snorting area and swinging club. Back then, in the 1970's/80's it was a basic caravan site with a small amusement arcade containing table top Asteroids and Space Invaders. If you wanted a swim you would nip down to the beach and paddle in the sewage outflow safe in the knowledge that nasty diseases and child snatchers hadn't been invented. (Now you need to take a prepreswimmingpoolshowershower, a preswimmingpoolshower and a swimming poolshower before you are even allowed to look at the swimming pool, then you are required to have a postswimmingpoolshower, a postswimmingpoolshowershower and then remain in quarantine for a week incase you pass something on to one of the precious little darlings that people insist on taking on holiday). The sea was unimaginably cold. Well. I suppose you lot that live out near the flipping North Pole (

think4yrself for example) would probably scoff at me saying that. But Cardigan Bay was bloody cold.

Of course, at this time nasty skin cancer causing ultraviolet rays and holes in the ozone layer hadn't been invented and if it wasn't for my fair complexion requiring me to wear a tshirt when I went swimming which although protected my torso, didn't do much for the arms and legs. Added to that, I wasn't the strongest of swimmers because I had ear problems as a child and wasn't allowed to go in water incase I did damage to the surgery. Not that it did like. All that meant was I couldn't swim very well until I was about 10. But I digress. Greenacres also had acres and acres of sand dunes to explore and views of the Carn Fadrun, the Snowdonian mountains and Harlech Castle.

Further along the beach cars were permitted to drive. Two things stick in my mind about this privilege, the first being my first ever "drive" of a car. When the beach was quieter my dad would take the Escort onto the beach and I would sit on his knee and turn the wheel while he operated the pedals. The second thing being that often people would park their cars on the beach then bumble off to the pub or somewhere further along the beach to enjoy themselves. This would frequently result in people forgetting to check the tidal times and hilarity would ensue when cocky holiday makers would return to find their car somewhere in the middle of Cardigan Bay. Of course you wouldn't get that today. Pretentious wankers in their smart pristeine cars would probably have some sort of tidal early warning system hot wired into their brain. Also the "risk" of having a car on the beach would probably be too great and the council have probably stopped the practice of cars on the beach in case someone mistakes a Porche for a tube of Smarties and chokes. Or in case it incenses someone's religious beliefs or some other PC crap.

Happy times. Irreplaceable times. These days Porthmadog is spoilt by the frightful hordes of frightful families in 4x4s and other fat arsed cars. Screaming overly spoilt and cotton wool wrapped kids, disenchanted husbands and hyper-fussy mothers who either don't give a shit about their kids or give too much of a shit about their kids. Cafe Bars, expensive boutiques, surf shops, stinky burger bars and snooty retired pensioners trying to recapture their lost childhood in their autumn years. But I doubt kids today have as much fun as I did dicing with death and mistaking cars for tubes of smarties when I was their age. This year I would love to travel to Wales along that route described. Eat cold bacon sandwiches and drink warm milky coffee from a tartan thermos flask. I long to stand on the platform of the Ffestiniog Light Railway, inhale the steam from the trains and admire the view across Cardigan Bay. Relive part of the magic but not all. Before such practices are banned because someone might get offended or some boffin discovers that there is too much salt in cold bacon sandwiches or that holidaying in Wales is bad for the environment. Happy fond times.