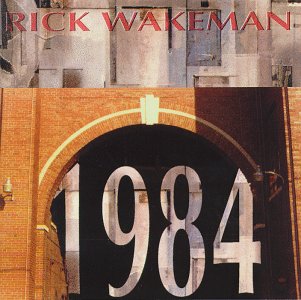 Take one Chaka "Chaka" Khan (out of deep storage), a dose of Kenny Lynch, a teaspoon of Jon Anderson, a pinch of cockney rebel Steve Harley and mix well with copious amounts of bearded prog rock keyboard player (remove beard). Garnish with sprinklings of Tim Rice Libretto which has been steeped overnight in a solution of George Orwell's 1984. Leave to play for 46 minutes.

Rick the bearded grump mashes out another album of prolonged twiddling this time without the ice skating panto horses. Instead he collaborates with Tim "Jeeeesus Christ Superstar" Rice and tells the story of Orwell's 1984.

If you can listen through Chaka "Chaka" Khan's screeching you will hear something quite entertaining. Don't get me wrong, this isn't "Lounging about on the sofa drinking coffee" music, nor is it "bring some girl home and romance her" music (unless you've found the mythical female prog fan). It isn't even "Aren't we refined" dinner party music. It's "Let's vacuum the house" or "Wash the dishes" music.

Admittedly I used to listen to it when I did my paper round so it isn't all that bad really.

Except for the screeching.