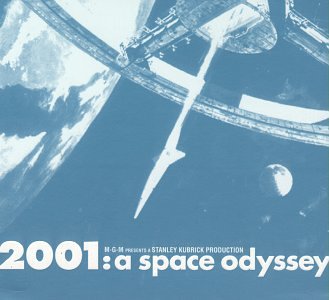 As a child I thought 2001 was boring. Too much talk. Not enough lasers or explosions. And what was that thing about the huge slabs of Cadbury's Dairy Milk in space about? And why was Rigsby talking with a Russian accent? But hey! Look at all that cool stuff we'll have in 2001! Holidays in space, floaty pens and Commodore 64s will have huge red lights and be able to kill you. Wow.

As a twenty something, 2001 became the wall paper for mind experiments. Mostly to do with the weird bits at the end. A chap I knew edited the weird trippy hyperspace sequence at the end into a 3 hour stoner flick complete with far out music. Suffice to say, his place was popular with hippies and tourists of the ether on a Friday night after the pubs had closed.

The soundtrack for 2001 is a mix of familiar classical Strauss waltzes interspersed with more unusual Modernist works by Gyorgy Ligeti. Ligeti, you might recall, is a progenitor of the atmospheric style of music. Eerie chanting choirs (they chant "Eeee" and nothing more) are part of the course with Ligeti and sections of his Requiem provide further feelings of unease and suspence. It's amazing what music can do isn't it? Some might think of six minutes of people going "eeeeee" discordantly would be torture, while others listen through the surface and deep below feeling the pulses and rhythms on an almost synesthesic level.

On reflection I seem to recall one of my brothers having the 2001 soundtrack when I was a child. I'm certain my mum insisted that he did not play the album when I was around as it might be too scary. It probably was, but I'm sure the continuous playing during my early years, altered my mind on some level, meaning I can appreciate atmospheric, true industrial, noise and rhythmic genres on a significantly different level.

Or perhaps has given me the ability to spout shite.