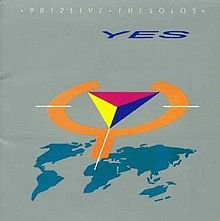 People that have known me for a while will no doubt agree when I say, as a youth, I was weird. When all my contemporaries were enjoying U2, Deacon Blue, Blur and Shakespear's Sister; I was deeply entrenched in a puddle of prog. Most notably, Yes and Triumvirat.

As I reached my early teens my desire for music grew. HMV became the Minaret that called me through it's doors to the music Mecca that was inside. Remember, this was many years before the Internetz and free musicz. You would have to go through the LPs and CDs alphabetically by artist and hope that there would be something new or exciting within your price range. If they didn't have the album, you could ask them to order it, but they'd probably charge a fortune. Or you could just hope that on the off chance it would somehow miraculously appear in the racks.

In the day, records were out of my price range and I would use Christmas and Birthdays to boost the contents of my music library by asking grandparents to buy me the albums or by using gift vouchers. One of the albums I got during this time was this. Unfortunately the vinyl got warped somewhere between the printing press and my record player. I didn't have a receipt. I didn't have the courage to ask for a refund. Instead I listened to the listenable bits and made do.

This album reminds me of so much about my childhood. Probably because this and the accompanying studio album and video were on repeat 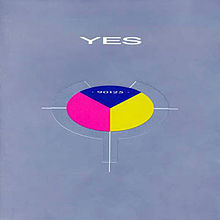 I wrote to Jimmy Peado Saville and asked him to fix it for me to sing with Yes because of this album. He was obviously too busy fiddling to Fix anything for me.

90125 is a break from the twiddly weirdness of their earlier stuff. A complete style change from Tormato and Drama. Yet it works. It works well. They even had a new guitarist. Trevor Rabin (Steve Howe had gone to play with Asia). He looked so cool I wanted long hair like his. I wanted to be dark haired so I could have long hair like his. This was new stuff and a new style that would continue to evolve and grow like me. I must have listened to this album a million times as teen and as a twenteen. With the VHS live video to accompany it too.

Incidentally, this is the album which contains Owner of a Lonely Heart; Yes' most famous song.