I’ve been a bit lax over the past few years detailing the various amazing and awesome holidays I’ve had. Mostly due to apathy but partly to do with work and lack of mojo. It’s curious how a few days away from the desk reignites the writer in me. Perhaps I need a period away from the mundanities of day to day life, you know, like a holiday….

Anyway, this year’s August holiday was a two centre jobbie. The first centre was in a shepherds hut near Weston-Super-Mare which is not far from Bristol and about a 2 hour drive away. Of course British motorways being what they are at the moment, this actually meant a 5 hour journey.

The shepherds hut was a shed on wheels and situated in a field surrounded by some very mischievous goats. Goats, as you know, eat everything and anything but fortunately they didn’t eat us. On arrival though I would have been happy to eat the goats I was that hungry but a quick trip into Weston-Super-Mare solved that. 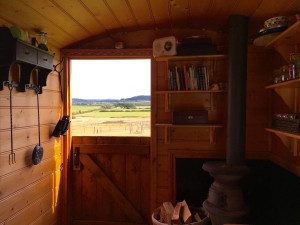 There’s something about British seaside towns. Like pit villages in South Yorkshire, most British seaside towns have had the heart ripped out of them and the signs of steady decline are evident. Burnt out piers house seagulls, sorry looking once grand hotels house the elderly and hard-up and the lack of food outlets selling anything other than fish and chips, burgers and steak is endemic.

I don’t know what it is with British seasides. Living in the midlands, fish is often expensive and hard to come by. British seasides, being coastal, should be making more of the rich pickings from local fishermen. Instead it is difficult to differentiate between restaurants, especially in South Wales, as we will see later in this series. It seems that most “family” places do battered fish, burgers and steak. Occasionally you’ll find one that does pizza or chicken. Maybe one will do boil in the bag lamb shanks. It’s unimaginative and uninspiring. However, hungry and approaching desperation, we opted for a place called Bare Grills which was basically a variation on burgers and steak.

Returning to the hut we enjoyed a stove based wood fire which nearly melted our faces and wound down for the evening listening to Radio 4. The next day our adventure continued. The facilities at the shepherds hut were well kept but basic. The goats curiosity had passed and they eyed us with suspicion. One particular goat I called The Goat of Mendes seemed to be the ring leader and would frequently be sighted beyond the confines of their field together with the rest of the herd.

Bath called. But there was only a nice shower and separate loo, and a shared kitchen accessed through a barn attached to the main farmhouse. Of course, the Bath I refer to was the ancient and beautiful city outside Bristol. Bath is to Bristol what Leamington Spa is to Warwick. Spa towns always have me wondering why some enterprising individual hasn’t capitalised on the concept of spas. I quite like the idea of a sauna, steam room and caldarium followed by a dip in natural spring water. All the rage in places like Finland and Iceland so I’m led to believe, in the UK though, they’re expensive, few and far between.

Bath was manic, tourists everywhere. To be expected I suppose as it was/is school and family holiday time which means wall to wall visitors nudging and being hurried along through every tourist attraction. I’m fairly certain that prices increase as a result too.

Lunch was had in Yo! Sushi, Zoe’s favourite. I have a running theme with sushi in that no matter how much I eat in such places I always end up feeling hungrier than I was when I went in. I like the concept of sushi restaurants and wish it was applied to other establishments like tapas or mezze. But I can’t see burger/steak/boil-in-the-bag-lamb-shanks being successful in a sushi like conveyor belt environment.

Ravenous, after eating for what seemed like an age, we nipped into Waitrose to grab some “cook at home” barbecue goods. It has already been discussed how I feel about barbecues. I always end up cooking and my own food is often spoilt or cold by the time I get round to eating after ensuring everyone else is sated. Trying to be simplistic helped though and two pork steaks and a baked sweet potato became my basic yet delightful repast for the evening cooked over a wood fuelled fire pit.