When it came to leaving the hut I actually felt a bit sad. Zoe had enjoyed the stay there and her happiness is worth more than the world to me. Sadly we had our next stop already booked and this was a 3 hour drive away.

It was decided to split up the journey to Haverfordwest with a visit to the National Showcaves (www.showcaves.co.uk) near Brecon. It was only a “slight” detour but worth it. I love caves. I’ve been to many cave systems the world over. Postjana in Croatia, Drac in Majorca, Hato in Curacao and the majority of the caves in Castleton, Derbyshire. But none of these compare next to the natural splendour and beauty of Dan yr Ogof. Sadly the visit was slightly marred by the presence of “Too Many People” ™ but definitely worth the visit. 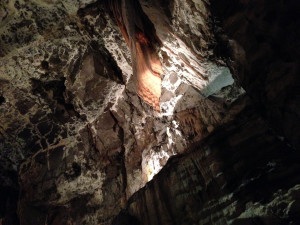 Back to the car and more driving to beautiful Slebech Park near Haverfordwest. The last time I was in South Wales I had a different wife. Back then we accidently stayed in a gypsy camp, fell in love with an organic farmshop and ended up doing a semi-coastal tour of Wales. This time I started to realise why I ended up doing the semi-coastal tour in the first place. 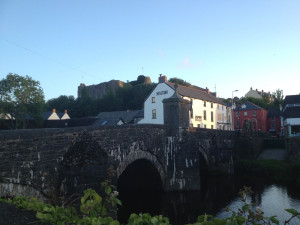 Unlike North Wales, which generates a great deal of its income through tourism, South Wales tries to do the same but with limited success. In fact, if it wasn’t for the bilingual signage it would be difficult to distinguish which part of the UK we were in. North Wales seems to be more Welsh than South West Wales and similarly, North Wales seems to be more tourist orientated. South Wales is vast, but per square mile there are less things for the holiday maker to do than in North Wales. Beautiful beaches and walks are all well and good but during wet days there is little to occupy oneself with other than trudging round market towns and castles. Furthermore everything is so far apart. Our first day there saw us travelling over 50 miles away for something to do having done the picturesque St Davids and around in just under 2 hours. 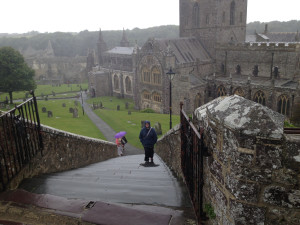 Our mission was to find somewhere that did quality seafood and one would have hoped to find more seafood based restaurants than anything else. Alas, we had to travel all the way to Aberaeron to find something that wasn’t just fish and chips or burger and steaks. We dined at the Summer Grill, which, it seems, is a project run by the people who run a different restaurant in the area while the owner is on maternity leave. Initially reluctant due to the impression they solely did steak, we were both pleasantly surprised by the quality of the food there. When we arrived we were the only diners present, by the time we left, the entire restaurant was full. A good sign surely.