Wednesday was wet. Stuck for things to do we mooched about killing time. Usually in such situations one might loiter in the hotel. Our hotel was a splendid affair. Stately and situated in beautiful grounds surrounded by estuary, Slebech Park hotel oozed with pretention and ponce. I could overlook the quaint bijou room with “authentic” low beam across the ceiling/middle of the room if it wasn’t for the “small portions for high prices” attitude of the restaurant. 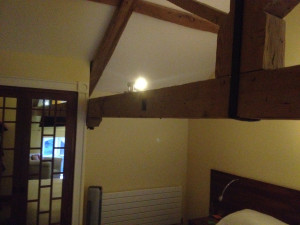 When compared to the estate in which the hotel sat, the restaurant’s Estate Breakfast conjured mental images of a feast of Balshazaarian proportions: plateaus of bacon, rafts of sausage, black puddings the size of saucers and mushroom forests on a plate with fried bread and other cooked breakfast morsels. Where I come from an estate breakfast usually conjures images of a packet of Benson and Hedges and a can of Kestrel larger. Sadly the actuality was more an estate in the form of a model village. One slice of bacon, a “local” Toulouse sausage (which repeated on me all day), a lump of charcoal passing itself off as a black pudding, an undercooked tomato and some suspicious slimy objects which were supposedly mushrooms all of which were dwarfed by the plate. 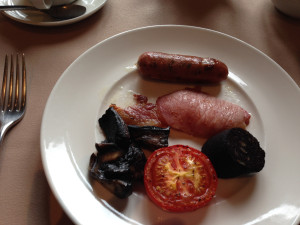 Disappointed by this I worked my way through the other options during the remainder of my stay, croque monsieur, which was disappointing and the porridge, instant with “honey”.

These disappointing breakfasts were indicative of the evening meal that was to follow. I really can’t understand why, in this day and age, restaurants still insist on overpriced small portions. I’m told it is because cookery is an art and that each plate is a work of art.

Artistically placed steak accompanied by a miniature deep frier basket of “thrice” (overcooked) cooked chips and a garnish does not win prizes in my stomach. Call me a Philistine if you wish, but I just don’t get it. I can pay half the amount at a pub and get the same with more in quantity and less in presentation.  If I wanted to eat art, I’d go to Tate Modern. I want to eat at a restaurant because I am hungry not because I want to see Turner Prize entrants.

Even the less poncey Plantagenet’s restaurant in Tenby managed to fill my plate for roughly the same price without compromising on taste or presentation. Lemon sole again for me with an interesting mix of unusual vegetables prevented it from being simply posh fish and chips.