Watching a programme on the BBC at the moment called “Back in Time for the Weekend”, the premise of which is that a family lives an entire decade through a week or so. This week it was the 1980s. During the 1980s I was aged between 7 and 16 so a great deal of the show featured things that were part of my childhood. One particular part that was discussed was the invasion of British culture by American culture highlighted by a sequence involving the young boy of the family taking part in some breakdancing.

Breakdancing was an activity that all the “cool” kids at my school took part in while pointing out my lack of coolness for not joining in. Ironically, I was too much of a hipster to breakdance and simply remained aloof by looking on at the buffoons attempting to spin around on their backs.

Also watching Happy Valley, which, if you didn't know, is filmed in and around Hebden Bridge, a place I have spoke about on LJ before.

I used a metaphor today to describe a situation at work. I asked the listener to think about the time when they’re eating a really delicious feast but they’re now starting to feel full and the sinking realisation that there are still loads of chips and salad left on the plate and the prospect of dessert is diminishing due to lack of appetite. They nodded in appreciation of the mutual experience.

The common theme for the week has been how fucking sucky February is. No. It really is sucky. I'm sure this year there have been attempts to make it a double February year like it was in 1978. But I'm wise to it. Even so, this February has been painfully longer than usual.

In an effort to reconnect with my gender (though on reflection that sounds like I’ve been a transexual or something, I haven’t, I’ve just felt detached from “man” things like building random things out of wood, sucking air through my teeth and wearing flat caps) I’ve signed up to a few “mens lifestyle” pages on the interwebz0rz.  I’ve tried “mens lifestyle” magazines in my life twice before with varied success. FHM was my first foray into “man culture” back in the 90s until I tired of the incessant soft porn images of girls. I tried Esquire and Mens Health but ended up feeling bored, uneasy and a stranger in my own gender. I then discovered a more mature mens magazine called Later which I really enjoyed, but, like most things I enjoy, it ceased publication mid-run.

Hopefully reading a few “male orientated” lifestyle magazine articles I will mean I will soon find myself wearing oil covered overalls, looking into engines knowingly while drinking pints of mild from dimpled glasses with handles. Oh and before you start, by the phrase “male orientated” lifestyle magazines I don’t mean the ones you find in the bushes in the park or on the top shelf of the Private shop.

In the meanwhile I’ve grown a beard. It’s at that point where it starts to itch my face and I find myself trying to pull whiskers out of my moustache using my teeth. I really can’t understand why people grow beards on purpose. I have grown mine for two reasons.

I joke ironically my beard is in place because I’m a hipster. I’m not a hipster. I’m too cool to be a hipster. I didn’t do breakdancing in my childhood and I came too late to the shoe gazing scene.

I’ve also been growing an amaryllis. Well, Zoe and I have been looking after her mum’s amaryllis while she’s away. Looks good. 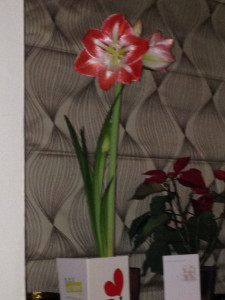