A wise old Irish man (now probably deceased) once said to me: "If you have a car, ye'll nay ha' nee money begorra"

zoefruitcake has a similar philosophy, passed on to her by her mum.

Today I had an expensive lunch thanks to some passing knob head who thought the front lower grill on my Volkwagen Golf would look better on their Volkswagen Golf than mine. This, with the additionally mysterious "previously undetected during MOT" bald tyre, added a further unexpected £200 onto the £2000 bill already incurred by keeping the vehicle roadworthy this year. I guess I'll not be having any new spectacles or walking boots this side of summer.

On Sunday, being the daredevil and thrill seeker I am as well as being the kind of guy who likes to show a lady a good time, I took the wife to Dracote Water near Rugby to see the alpacas. After braving a biblical swarm of black flies, we eventually got to see the fluffy buggers, grazing peacefully on the hill side at the far end of the reservoir.

On the walk round we saw an event taking place, a Fun Military Mud Race. Basically, kids and dads running a 5km course through mud. I thought it looked like fun, Zoe said it looked like hell. Not the dads/kids thing, the mud. These days though, being a fatty not a fitty means the only thing I could run is a bath; running for a bus would be plain foolish. However, if I was still the young svelt athlete I was before I bought my first car, the thought of running through mud for shiz and gigz would probably have been most appealing (in between computer games and wanks of course).

On our return from the alpacas I witnessed beardy water sporty types (with topknots) gushing over a new scooter/bike hybrid some travelling mendicant was trying to promote. I imagined myself riding one. I imagined myself aboard one, all muscular, bronze, bearded and top knotted. Then realised what a knob I would have looked and immediately dismissed the idea.

The proliferation of men with "trendy" scruffy beards, top knots and half mast trousers seems to be growing at an alarming rate. Even chaps with uncut unkempt hair, a hairstyle I have been promoting since 1996, seems to be on the rise. It seems scruffy bugger is vogue at the moment. Of course being a hipster, I was doing all this twenty years ago. Now I like to stand out from the crowd. I do this by not being pierced at all and not having any tattoos while the rest of the world gets all inked and holey. I imagine a pathologist musing about how unique I am in that respect as they perform their autopsy on me. So as I see the "Lets All Look Like Stegzy" trend taking over the UK, I have to reassess and think, maybe a haircut is in order. I also remain, this month at least, beardless while the rest of my male work colleagues are sporting several varying degrees of beardiness.

I am winning at the cool.

This weekend Zoe and I are going to Scarborough for a jolly. For this posts photograph, here is the last picture I took in Scarborough in 2005. 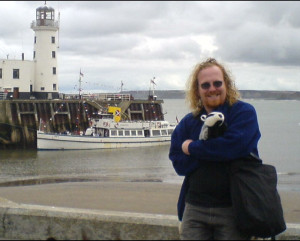