New year, new wheels. The trusty VW Golf TDi, Binwids, cost me just one £80 fill up too many and together with the diesel emissions thing, the VW software fiddle and the fact that I no longer need to drive over 100 miles a day to do my job, it was time to retire it. Fortunately Mr Big Man, the boss, bought it off me for his brother. Which was nice; and he thought so too.

So now I drive this little zippy thing 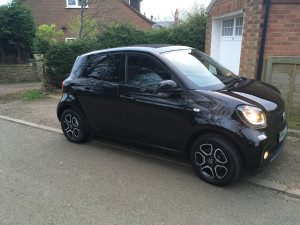 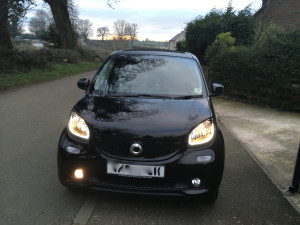 It's a Smart ForFour with Nightsky and it's slicker than the hair on a 1950's binman and fewer miles on the clock than the coast of Wales. It even has heated seats, so Zoe is happy and the number plate is handily blurred so that I don't get caught by speed cameras and ANPRs.

Of course today was my first proper outing in it and I quickly remembered how it was when I used to drive the AX. 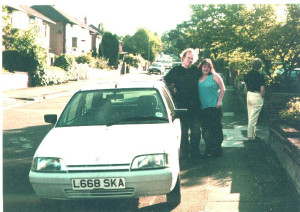 My first car, the Citreon AX Jive, with Mrs Gnomepants Mk1
That was a nice car too, but you often found that van and truck drivers and wankers in BMWs thought that they could drive as close as they liked. In the Vectra, the Golf and the Hyundai Coupe, I noticed they held well back. Though I did notice that BMW drivers remained wankers. Of course back then I didn't know that BMW drivers only drive BMWs because they can't actually drive and that driving a BMW is the motoring equivalent of cycling with stabilisers. Trufacs.

Although it is built by Mercedes Benz, as you can see, the Smart actually comes with indicators and, unlike Jaguars, it actually has a decent accelerator. Indeed, you might also notice that it has mirrors too, something sadly lacking on Audis. Not only that, you wont see any rust on the vehicle which proves that Ford have nothing to do with it.
Subscribe